Back in 2014 I purchased a Russian made Ural Gear Up Sidecar Motorcycle.

This is Day 2 of our sidecar ride up the coast of California from Oxnard to Lompoc.

Day 2 – Riding up the Coast 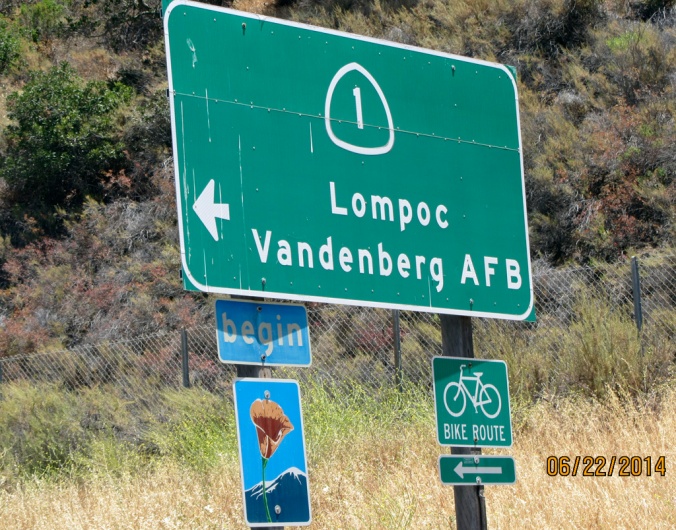 Morning came early on day two and we were excited to continue our motorcycle sidecar journey up the coast. We re-packed our gear, jumped on the Ural and hit the road.

This was the first day we were to going to ride on the super slab for a while via Highway 101 heading north. This funky Russian bike did its best to build up speed and keep up with the traffic, but at best it hummed along at 55-60 mph (remember, its fully loaded with us and our gear) and so we stayed in the slow lane. The Ural was definitely not built for speed.  This fact was no surprise to me; I knew what I was getting into with this bike.  It’s all about the journey right? What better way to enjoy it then by cruising at a slower pace…. that’s my story and I’m sticking to it! (Heh).

Getting out of Oxnard and riding thru Ventura was a sort of battle; the highway was backed up with cars going very slowly in each lane.  Turned out they were all getting off at the Ventura fairgrounds exit for the Vans Warped Tour.  I can appreciate that.

It was at times like this when traffic was moving slowly that I missed being able to split lanes like I can on my Harley. But it was ok; this is part of being on this different kind of bike.

After some miles I saw a sign that said Hwy 1 exit and we jumped off the 101 and cruised down a road that hugged the beach on the left and Highway 101 on the right, I did not know this road was here nor that it ran along the 101 for so far, this was nice.  At one section, there were dozens and dozens of RV’s camped along the road facing the beach, what a nice place to hang out!! 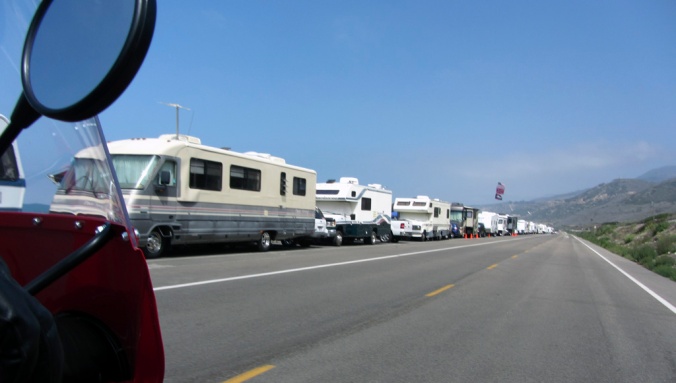 This small beach side road went for quite a few miles and was a nice stretch of road but eventually we were soon back on 101 heading north bound along with all the weekend traffic. Cruising in the slow lane was not so bad; it just took a while to get used to it.

As we approached Carpentaria I got off at the 150 Rincon Road exit and headed left down a dead end road to our favorite “rest stop” that is a great place to take a break. 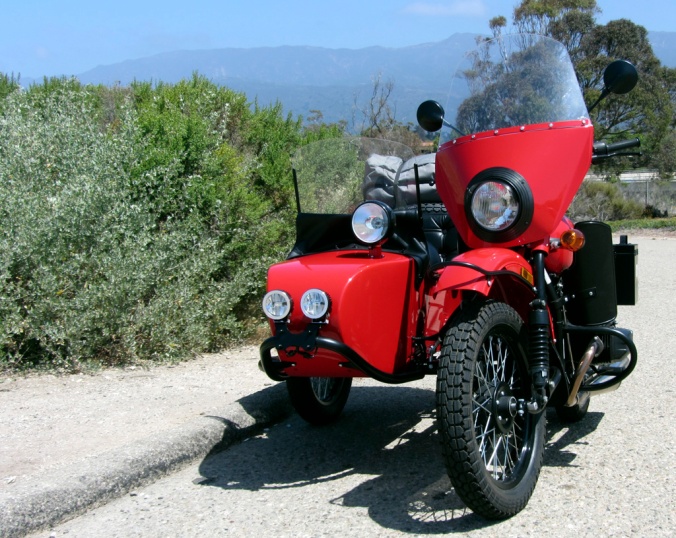 This area overlooks Rincon beach and has some great panoramic views of the ocean coastline.  If you’re lucky you might even see the Amtrak train go by. I often stopped by here on my way home when I worked in Santa Barbara while driving my Jeep Wrangler and always had a ton of fun 4x4ing up and down the hills here. 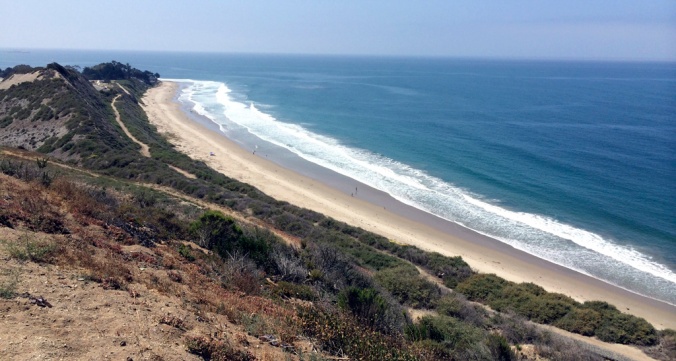 When we arrived at Rincon overlook as I call it, a big guy came walking immediately over to, as he put it – “gush” over the bike… I guess he liked it.  He took a lot of pictures of it.  He said he had always wanted to get a Ural.

He was on a pretty cool bike too; he was riding a nice red Italian Vespa Scooter. 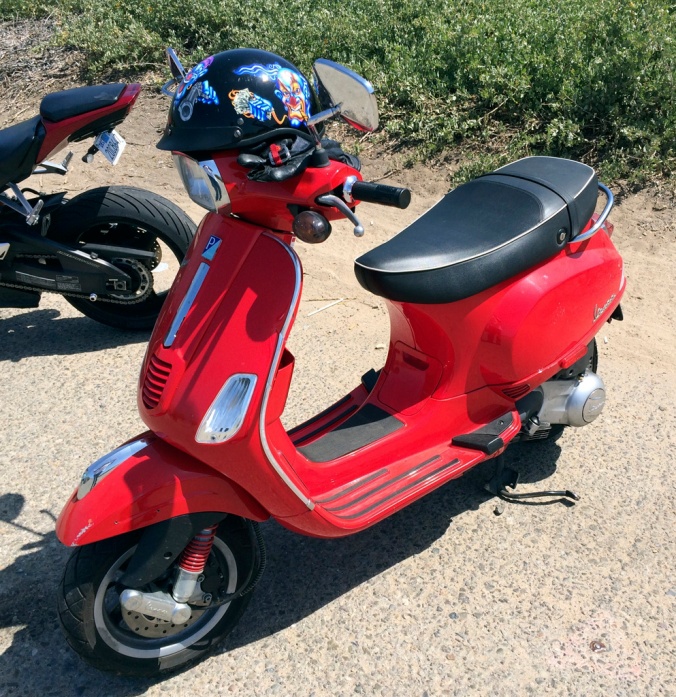 We talked for a while about the bikes and I found that he was a local so I asked him about some back roads thru Santa Barbara that I had remembered riding around way back when I had worked in the area for Transoft and Hewlett Packard.

The guy on the Vespa (forgot his name) offered to lead us thru some back roads on our way north and so we ventured off following him on his Vespa and his son on a Ninja – this was the strangest riding combo I’ve ever seen but they seemed to be having a lot of fun showing us some fun roads.

As we got to the outskirts of town we said our goodbyes and split off from them and got back on the 101.After a couple of “photo op” stops along the way we finally arrived in Lompoc at the Travel Lodge hotel and then we went to lunch down the street at a restaurant called Jalama Beach Cafe. 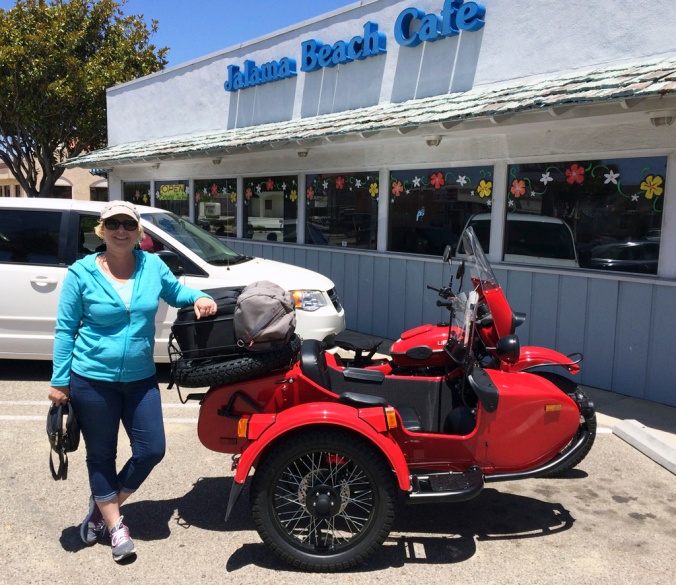 The restaurant is owned by the same folks who created and run the famous Jalama Beach Grill, which we have been going to for a couple of decades. They are world famous for their Jalama Burger. Being a semi serious burger connoisseur who’s even done a few burger tasting contests/evaluations I can confidently tell you that the Jalama Burger is truly one of the best burgers on the entire planet. We had a blast hanging out with the waitress and talking about this and that and everything else – she really made the experience that much better – it’s one of the things I really like while doing road trips – meeting all kinds of people. 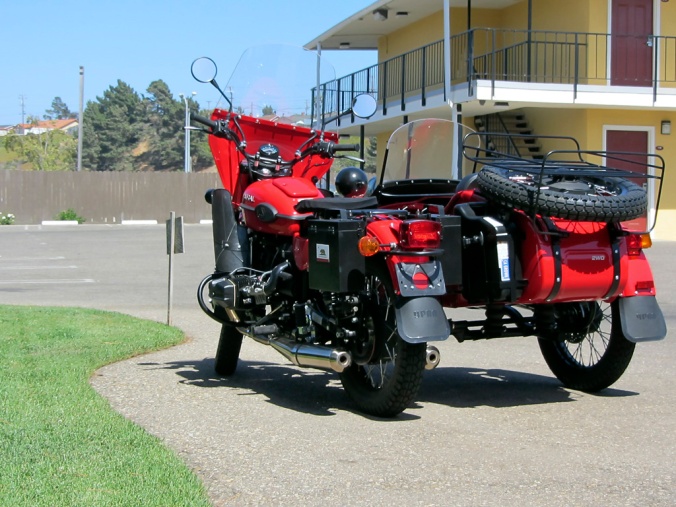 Back at the hotel we found people were standing around my bike and taking photos.  We hung outside for a few hours and had a good time hanging out with them and talking to several fellow riders about their bikes and mine.  Turned out one guy was there for three months and he lived nearby us in NorCal at Forrest Hill/Auburn.  It’s amazing to be far from home but meeting people who live somewhat near us.  It sure is a small world!

The more I ride this bike, the easier it gets. We had a good time riding to Lompoc. 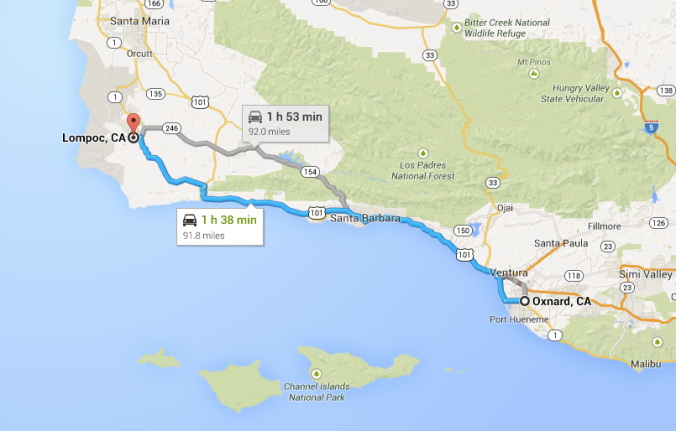