While working in Ann Arbor Michigan, another restaurant that came highly recommended was Tomukun, which is a restaurant with two sides.

One side is a Noodle Bar serving Pho and more and the other (where we dined) was as described on their website, a Korean BBQ restaurant and bar in downtown Ann Arbor Michigan that features table-top grills, classic Korean soul food and a variety of Asian draft beers, soju, makgeulli, and cocktails. 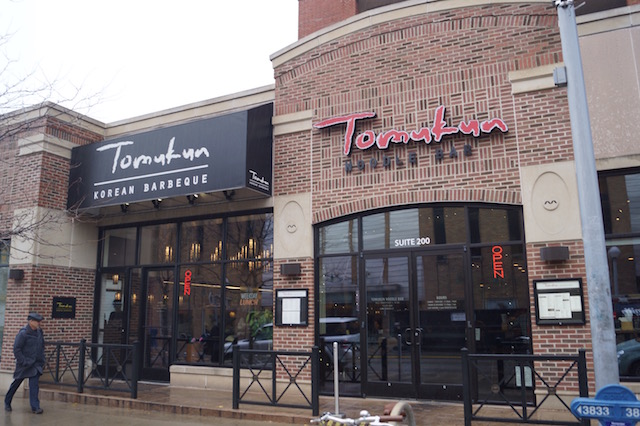 Upon entering the Noodle Bar door (I think?) we found there was nice small bar near the front with regular booths behind it, and on the other side of a small wall were tables with a BBQ built-in to each of them. It was only obvious from there, we had to try Korean BBQ at the table, which turned out to be a cool experience.

The restaurant was slightly packed so I put my name down for a table and was handed a pager and told it would be a 20-minute wait. From there my coworker and I went and sat at the bar to wait to be called when our table became available.

We ordered a couple of Old Fashioned drinks with Makers Mark (a favorite after a long hard day on the road). We were very impressed, the bartender really knew his stuff, so much so I’d call him a true mixologist. The drinks were unusually excellent, very well-balanced and tasty. It’s hard to find a great bartender who knows how to make really good classic cocktails.

Surprisingly we ended up being called for a table before our drinks were even done being made.

That was good luck, and so with our newly made drinks in hand we headed into the dining room for a new and interesting culinary experience.

You’re given the option to eat Korean BBQ where you can cook your own meats or just regular dining where you can choose from Korean entrees like bibimbap, stir fry dishes, soups, stews and more. They have a really good menu with a variety of options that instantly made me want to come back someday to try their other items too.

The restaurant looked nice, it was spacious, clean and well-lit with a modern design.
It was actually nice to dine at a place lit up well enough to read the menu, I’m sure you know what that’s like, trying to read a menu in near dark…argh.

The service was prompt and informative, making for an overall very nice experience.  Our waitress was especially good at explaining to us newbies how to use the built-in table grill. For the most part its the same as BBQing on your grills at home. 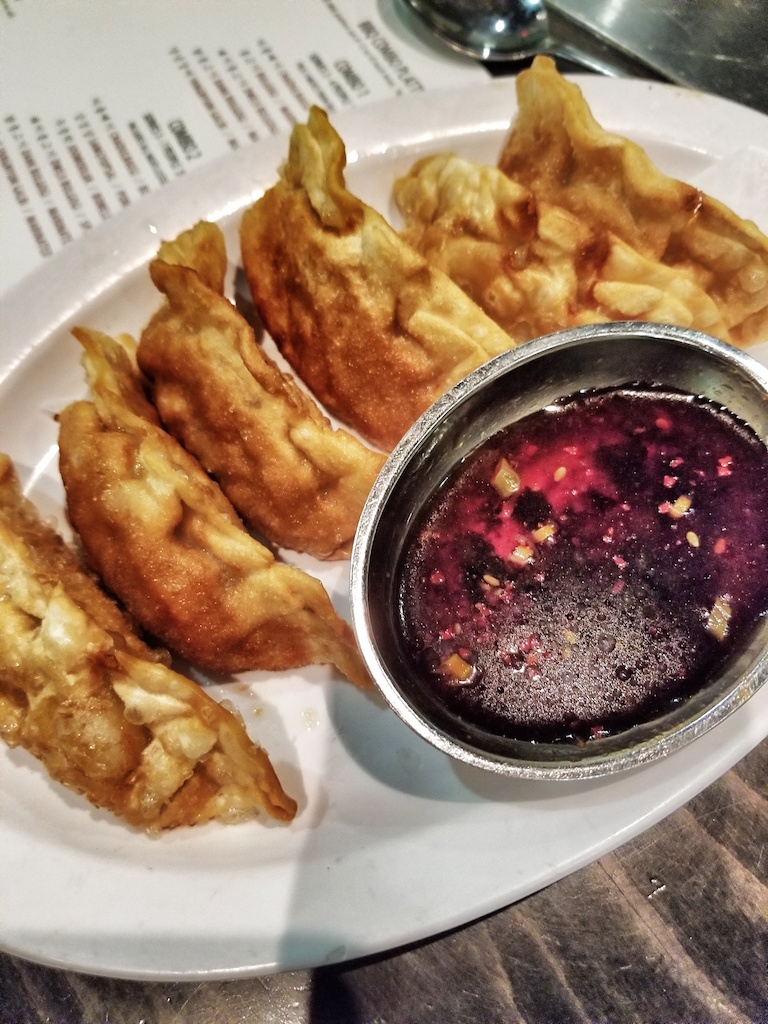 To start, had an appetizer of Pan Seared Dumplings consisting of pork dumplings served with a soy, garlic vinaigrette dipping sauce. They were delicious.

After reviewing the menu extensively and having had the experience now, I highly recommend getting a combo item as you get several meat choices and it’s enough to feed 2-4 people. There are other combo and individual meat options too, all good choices.

The combo comes with an endless supply (all you can eat) of traditional Korean side dishes called banchan, which is a small smattering of homemade traditional sides.

The sides mostly consisted of small dishes that had fish cakes, cucumber, Napa kimchi, mango, marinated potatoes, peppers seasoned in chili and more. The side dishes alone are almost enough to fill you up.

The BBQ orders come with a piece of pork fat to use for greasing the BBQ grill grates prior to and during cooking to prevent the grilled meats and vegetables from sticking to the grates, plus the melted fat adds additional flavor to the meats. It was really fun cooking at the table! What a great concept for a restaurant!

~ Korean BBQ scenery in action, click on the short video below ~

I was glad they included scissors at the table to cut the meats (photo below).

I can use chopsticks fairly well and have lots of experience with them (love Chinese and Japanese cuisines). My experience also includes travels to China, Japan and Hong Kong – but dang, how the heck are you supposed to cut meat with chopsticks? That’s one thing I’ve not learned yet to do.  One of these days  I should probably google how to do that 🙂

The food was all really good and very filling and as it turned out, it was more than we could eat while there.  Ended up cooking up the remaining meats and vegi’s and made a to-go box with sides and utinsels which I later gave to a homeless person up the street that we had seen earlier. It’s good to help others when we can, I need to do it more often.